The Catholic Church has been founded in heretical doctrine virtually since its establishment.

It has distorted biblical truths by adding, subtracting, or changing what the Word of God actually declares. This article is aimed specifically at the Jesuit Order of the Catholic Church.

I have been studying theology and apologetics for forty years but the extreme occultic nature of this bit of research shocked me.

Catholicism is every bit as occultic as the Masons or Mormonism; maybe more so. It is almost as maliciously evil as Islam and just a Satanic.

Now to be clear what follows is from the Jesuit Order of Catholicism.

This article focuses on what is called the Jesuit Extreme Oath of Induction. There are two versions, but they vary little.

One is the Oath is also quoted by Charles Didier in his book Subterranean Rome (New York, 1843), translated from the French original. Dr. Alberto Rivera, is one who escaped from the Jesuit Order in 1967, confirms that the induction ceremony and the text.

As they are quite lengthy I will not quote them in their entirety. For the complete ritual go here.

To set this up “when a Jesuit of the minor rank is to be elevated to command, he is conducted into the Chapel of the Convent of the Order, where there are only three others present, the principal or Superior standing in front of the altar.

On either side stands a monk, one of whom holds a banner of yellow and white, which are the Papal colors, and the other a black banner with a dagger and red cross above a skull and crossbones, with the word INRI, and below them the words IUSTUM, NECAR, REGES, IMPIOUS. This means: It is just to exterminate or annihilate impious or heretical Kings, Governments, or Rulers.

Upon the floor is a red cross at which the postulant or candidate kneels. The Superior hands him a small black crucifix, which he takes in his left hand and presses to his heart, and the Superior at the same time presents to him a dagger, which he grasps by the blade and holds the point against his heart, the Superior still holding it by the hilt, and thus addresses the postulant:” 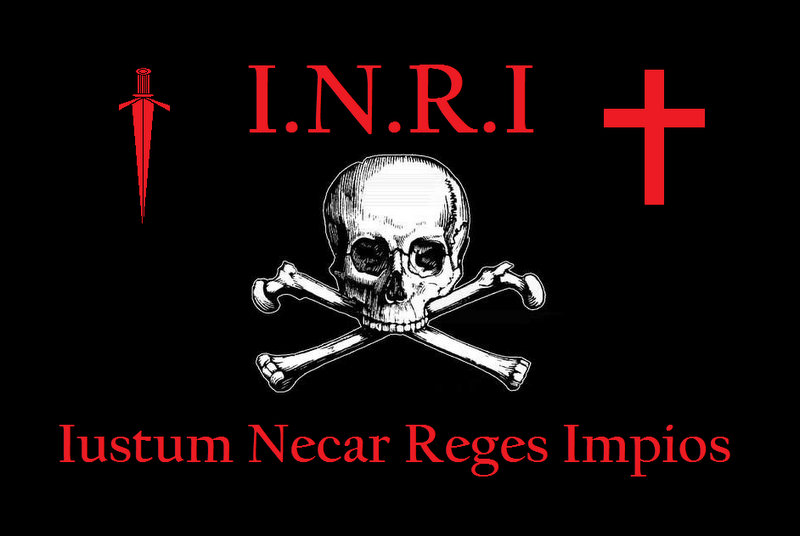 The Superior priest begins the ritual with a lengthy hortatorial oath beginning thus:

My son, heretofore you have been taught to act as the dissembler: among Roman Catholics to be a Roman Catholic, and to be a spy even among your own brethren; to believe no man, to trust no man.

It goes on to posit that the postulant is to pretend he is in agreement with whatever religion, sect, or denomination is mixing with at the time—he is after all a spy. He is to obtain “their confidence, to seek even to preach from their pulpits.”

As with Islam’s taqiyya, lying to gain an advantage, so too the Jesuit is to do whatever is necessary, even going so far as to denounce vehemently the Catholic Church and the Pope to gain the upper hand.

The Superior continues with:

You have been taught to insidiously plant the seeds of jealousy and hatred between communities, provinces, states that were at peace, and incite them to deeds of blood, involving them in war with each other, and to create revolutions and civil wars in countries that were independent and prosperous, cultivating the arts and the sciences and enjoying the blessings of peace.

All of this is to the end that the apostate Catholic Church “might be the gainer in the end, in the conditions fixed in the treaties for peace and that the end justifies the means.”

It goes on of more of the same and echoes strongly what has been already stated. The postulant then must assert his loyalty . . . to Christ? No no, he must to be all things to all men,”for the Pope’s sake, whose servants we are unto death.”

Not for Christ who died for all, but for a man, a little minded, power hungry man with the title of Pope.

When the Superior concludes the postulate or candidate gives an affirming response which begins thusly:

I, ______ now, in the presence of Almighty God, the Blessed Virgin Mary, the blessed Michael the Archangel, the blessed St. John the Baptist, the holy Apostles St. Peter and St. Paul and all the saints and sacred hosts of heaven, and to you, my ghostly father, the Superior General of the Society of Jesus . . .

Notice Jesus Christ is not mentioned in any of this! The Society of Jesus clearly has nothing to do Jesus, but this satanic society of the Jesuit Catholics.

The postulant further promises to wage war “secretly or openly against all heretics.” Heretics are defined as anybody not a Catholic.

What follows is only one (long) paragraph of the oath the Jesuit priest takes to be “promoted” to the next level:

I furthermore promise and declare that I will, when opportunity present, make and wage relentless war, secretly or openly, against all heretics, Protestants and Liberals, as I am directed to do, to extirpate and exterminate them from the face of the whole earth; and that I will spare neither age, sex or condition; and that I will hang, waste, boil, flay, strangle and bury alive these infamous heretics, rip up the stomachs and wombs of their women and crush their infants’ heads against the walls, in order to annihilate forever their execrable race. That when the same cannot be done openly, I will secretly use the poisoned cup, the strangulating cord, the steel of the poniard or the leaden bullet, regardless of the honor, rank, dignity, or authority of the person or persons, whatever may be their condition in life, either public or private, as I at any time may be directed so to do by any agent of the Pope or Superior of the Brotherhood of the Holy Faith, of the Society of Jesus.

Note in the first line Protestants, all non-Catholics are heretics! This is perhaps where Islam took some of their sick dogmas from.

This whole satanic ritual closes out with a Q & A between the Superior and the Postulate:

Q —From whither do you come? 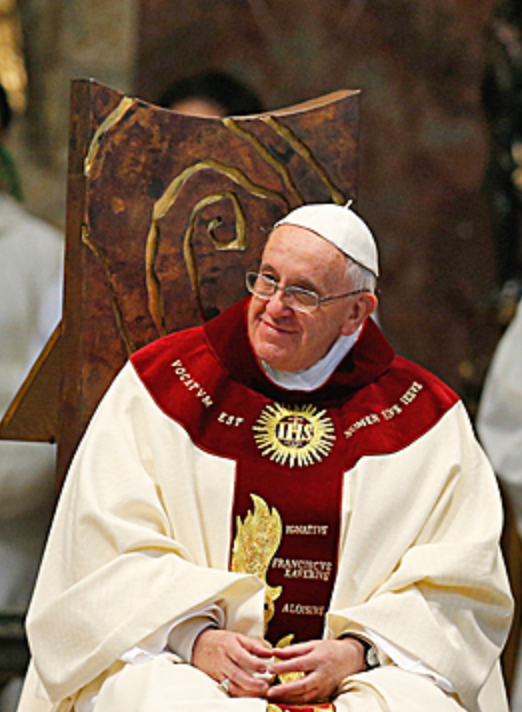 A—The Holy Father at Rome, the Pope, and the Roman Catholic Church Universal throughout the world.

A—The Successor of St. Ignatius Loyola, the founder of the Society of Jesus or the Soldiers of Jesus Christ.

A. —A venerable man in white hair.

A—With a naked dagger, I kneeling upon the cross beneath the banners of the Pope and of our sacred order.

Q—Did you take an oath?

A—I did, to destroy heretics [Protestants and all non-Jesuit Catholics] and their governments and rulers, and to spare neither age, sex nor condition. To be as a corpse without any opinion or will of my own, but to implicitly obey my Superiors in all things without hesitation of murmuring.

A. —In the bark of Peter the fisherman.

A. —To the four quarters of the globe.

Q. —For what purpose?

A—To obey the orders of my general and Superiors and execute the will of the Pope and faithfully fulfill the conditions of my oaths.

Q—Go ye, then, into all the world and take possession of all lands in the name of the Pope. He who will not accept him as the Vicar of Jesus and his Vice-regent on earth, let him be accursed and exterminated.”

Then the last command of the Superior:

Go ye, then, into all the world and take possession of all lands in the name of the Pope. He who will not accept him as the Vicar of Jesus and his Vice-regent on earth, let him be accursed and exterminated.

To conclude understand Pope Francis is a Jesuit–the first Jesuit Pope. This is the oath he took and aspires to.

There is no sight of Jesus Christ or the One True God in any of this. It is Satanic. Jesus is denied outright by the Jesuits.

All that aside the truth of God’s Word declares: